The credit for the University of Evansville mascot “Ace Purple” can be attributed to a basketball coach whose team was defeated by Evansville College in the mid 1920s.

After the game, the University of Louisville coach told Evansville coach John Harmon, "You didn't have four Aces up your sleeve, you had five!" 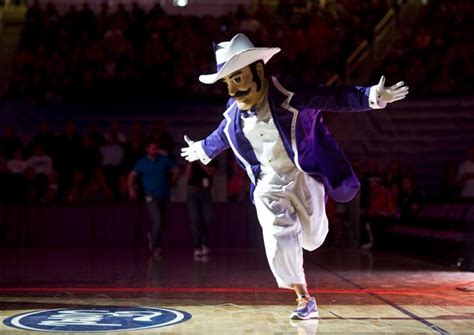 Harmon related the quote to Evansville Courier sports editor Dan Scism. Both Harmon and Scism decided they liked the sound of "Aces" better than "Pioneers," the Evansville College nickname at that time. In 1926, with popular support, the switch from “Pioneers” to “Aces” became official, but it wasn’t until the late 1960s that Ace Purple, the riverboat gambler, was fashioned by local sports cartoonist, Larry Hill.

Ace was created in the image of a turn-of-the-century riverboat gambler to represent Evansville's location on the banks of the Ohio River. But Ace Purple also brandished a club with a spike through one end and carried a gun, and his sneer made him a less than likable character. The University was not pleased overall, so Ace Purple the mascot soon vanished, but the team remained the Purple Aces.

In 1977, when Evansville moved to Division I, first-year sports information director Greg Knipping saw the need to bring the character to life as a mascot. He contacted Keith Butz, who had recently revamped Purdue's Boilermaker Pete. Butz turned Ace Purple into a more likable character, and Knipping convinced the administration that despite the gambling image portrayed by Ace Purple, his qualities of cunning, daring, quick wit and shrewd judgment made him an outstanding representative of the Purple Aces. Knipping was among those killed along with the University of Evansville basketball team in the December 13, 1977 plane crash. 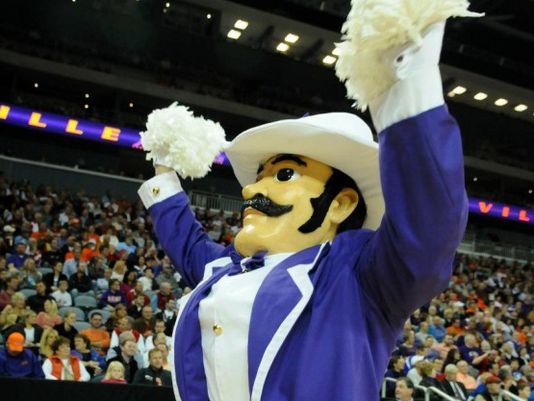 Today, Ace Purple remains unique among college mascots. Former UE basketball player Pieter van Tongeren (Class of 2011) modernized Ace’s look as his senior art project. The transition began with informal discussions on campus about the need for an updated look.  That was followed by feedback from an electronic survey responded to by more than 2,000 UE alumni, students, faculty, staff, and friends.  His new look debuted during Homecoming 2011 Reunion Weekend. 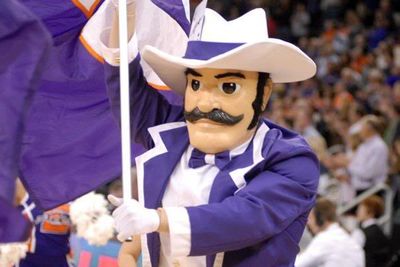 A mascot is any person, animal, or object thought to bring luck, or anything used to represent a group with a common public identity, such as a school, professional sports team, society, military unit, or brand name. Mascots are also used as fictional, representative spokespeople for consumer products, such as the rabbit used in advertising and marketing for the General Mills brand of breakfast cereal, Trix.

In the world of sports, mascots are also used for merchandising. Team mascots are often confused with team nicknames. While the two can be interchangeable, they are not always the same. For example, the athletic teams of the University of Alabama are nicknamed the Crimson Tide, while their mascot is an elephant named Big Al. Team mascots may take the form of a logo, person, live animal, inanimate object, or a costumed character, and often appear at team matches and other related events, sports mascots are often used as marketing tools for their teams to children. Since the mid-20th century, costumed characters have provided teams with an opportunity to choose a fantasy creature as their mascot, as is the case with the Philadelphia Phillips' mascot, the Phillie Phanatic.

Costumed mascots are commonplace, and are regularly used as goodwill ambassadors in the community for their team, company, or organization such as the U.S. Forest Service's Smokey Bear.